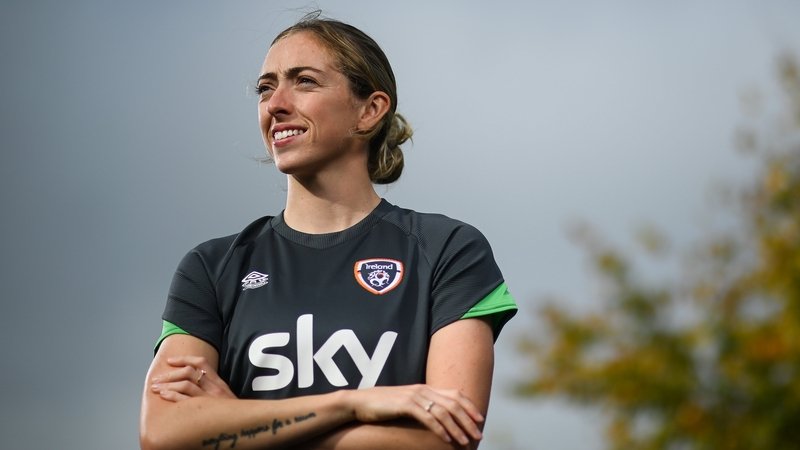 Games with Sweden will always evoke wonderful memories for Republic of Ireland midfielder Megan Connolly and she is hoping to add another in Thursday’s World Cup qualifier at Tallaght Stadium.

It was back in 2014 when the Brighton player stepped up to a free-kick 10 minutes from time in their Euro Under-19 Group B game against the Swedes in Norway. Connolly took two steps to the ball and curled a beautiful effort that kissed the post on the way in. She had already started celebrating before the ball had hit the net.

A 4-0 semi-final defeat to the Netherlands ended the side’s tournament but from the squad that earned victory against Sweden, Connolly, Savannah McCarthy, who scored the equaliser in the 2-1 win, Katie McCabe and Roma McLaughlin are all in Vera Pauw’s panel for Thursday’s game as well as the 26 October clash with Finland in Helsinki.

The Brighton midfielders is looking forward to renewing acquaintances.

“We’re going to prepare as best we can and bring everything we can to the pitch on Thursday and see what can happen.”

That summer in 2014 has convinced the Cork-born player that Ireland have the ability to compete at major tournaments.

The growth of the game since enhances her belief that momentum is rapidly building.

A group containing Sweden, Finland and Slovakia provides a difficult path to a first-ever Women’s World Cup, but Connolly is remaining hopeful.

“Last time (Euro 2022) we were so close and I think it’s something we’re longing for as a nation, to qualify for a massive tournament.

“We came up short the last time and it’s something we want to achieve. Yeah, we’re not going to shy away from saying that we want to make the World Cup, we want to be that team, why can’t we be that team that qualifies?

“But it is going to be tough. Look at the group, you see Sweden, Finland, Georgia, Slovakia, they are tough teams. We’re just going to have to take it game by game. Do that, get some points on the board and hopefully we can be that team.”

“I’m still quite young so I have looked up to older players for quite a long time, Niamh Fahey, Louise Quinn, Ciara Grant, all players that have come before me,” Connolly continued.

“I really looked up to them, they paved the way and I think this generation is the team that wants to go even further and qualify for a tournament so then the younger ones know it’s achievable and something we can do.

“But I think we have improved a lot in the past years, and I think we’re getting closer and closer.”

Another reason for Connolly’s belief is the sheer number of Irish players playing top-level football currently.

Eight of Pauw’s squad are currently competing in England’s Women’s Super League while the rest are playing at a high level in Ireland, Scotland, America or Germany.

“I think a lot of players in recent times have taken that step to play at the highest level.

“We see a lot of girls coming over to England and I think that’s important for us and it’s only going to help us in making that next step by testing themselves in the toughest environment.

“It’s great to see players achieving what they have and it’s only going to help us. Players are getting minutes, playing and scoring.”

Connolly returns to the squad having missed the Australia friendly win last month with a calf strain. Although frustrated at having to watch from afar, she feels that getting a win against higher-ranked opposition was the perfect tonic for the Sweden clash.

“It was great to watch to see them get the result that we’ve wanted for a long time, to get a result against a hard team.

“The team deserved it, it was a good result really and good to watch.”

Rice straw cutter and how it works

Megan Connolly: We won’t shy away from World Cup dream