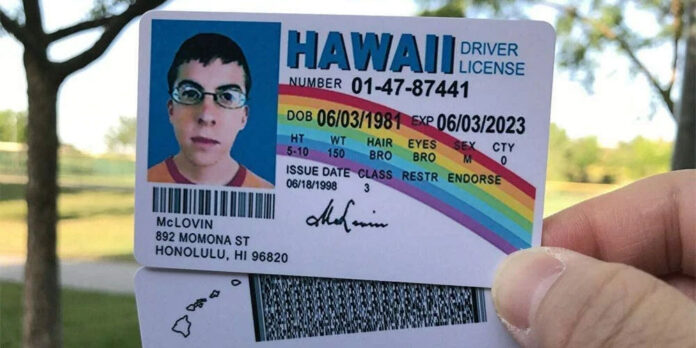 The mclovin id products are relatively popular. People wear t-shirts and products on which the ID is printed, and some go as far as to create fake McLovin IDs, especially underage kids. However, many people still do not understand why there is an obsession with the McLovin license. This post seeks to bring some enlightenment about this topic.

Why is the McLovin license popular?

The McLovin license stems from the hit movie Superbad. The movie was viral among teen comedy lovers and is considered a cult classic. The fake ID scene is the highlight of the movie, and it is currently one of the internet’s most famous cultural sensations.

The fake ID was possessed by the movie’s nerdy character, who gained respect from his peers by successfully using the fake ID to buy alcohol. The nerdy character’s real name is Fogel. However, he gives himself the nickname McLovin and uses it in his fake ID.

Most McLovin License products or fake IDs feature the original ID from the movie. The movie allows you to see the ID for a split second. While the film attempts to blur the ID, dedicated fans were able to get all the necessary details from it. Such details include; the ID name and address, ID city and state, driver’s license number, date of birth and expiry date, height, weight, hair, eyes, and sex of the ID holder. Creatives have used the exact image of the ID to create tons of products.

Most Superbad fans have a replica of the ID as a homage to the movie or a gag item. However, kids have also gone as far as replicating the ID to create fake IDs for getting into clubs and buying adult products like alcohol. Such kids have made the news and become internet sensations for attempting to dupe law enforcement with the unrealistic and comic ID. This is a testament to its popularity.

Superbad is a 2007 comedy hit that tells the story of high school nerds. The geeks try to lose their virginity before graduating from high school in the movie. Fogell, the leading character, promises to provide alcohol for a popular girl’s party. The group sees this as an opportunity for them to have sex. Fogel obtains a fake ID which he uses to get the alcohol. However, the ID is surprisingly unconvincing. Therefore, Fogel tries to prove himself by purchasing alcohol with it. His success at purchasing the alcohol helps him become the only one to have sex at the party. His achievement earns him respect and admiration from his peers.

Half a decade later, the movie remains popular among comedy lovers. The ID scene remains at the top of the most memorable comedy movie moments in existence. The ID also remains a product, hence the several McLovin ID products.

While the movie features many comedic and incredible scenes, the McLovin license scene is famously considered Superbad’s pivotal scene. The scene put the movie on the map and is one of the primary reasons people still talk about it.

Megan Connolly: We won’t shy away from World Cup dream